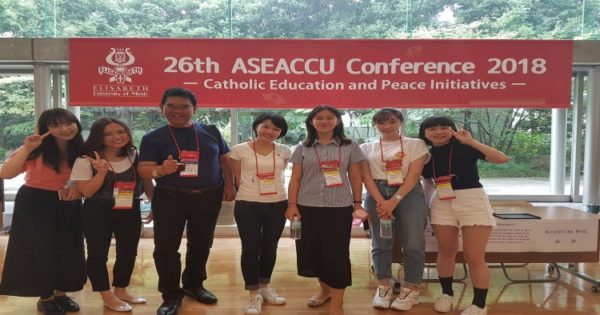 Dr. Frietz R. Tambunan, rector of the Catholic University of Saint Thomas attended the 26th meeting of the Association of Southeast and East Asian  Catholic Colleges and Universities (ASEACCU), in Elisabeth University of Music, Hiroshima. The congress took Catholic Education and Peace Initiative as the theme addressed during 6 days meeting (August 21-26, 2018). Mr. Kazumi Matsui, Mayor of the City of Hiroshima, a keynote speaker in his lecture, mentioned that Hiroshima has accomplished an incredible reconstruction after the atomic bomb destroyed Hiroshima, 73 years ago. It was predicted that in the ruins of the land no trees and plants would never grow for 75 years!

Around 400 students from different Catholic University in Asia and East of Asia attended the first part of the congress which was scheduled for the student and the second part will be for lecturers and university leaders. The congress was started by celebrating the Holy Eucharist in Memorial Cathedral for World Peace of Hiroshima.
Catholic University of Saint Thomas in Medan is a member of ASEACCU and has met Prof. Yuji Kawano to discuss future cooperation between Unika Santo Thomas – in Medan with St. Elisabeth University of Music, Hiroshima  (r).